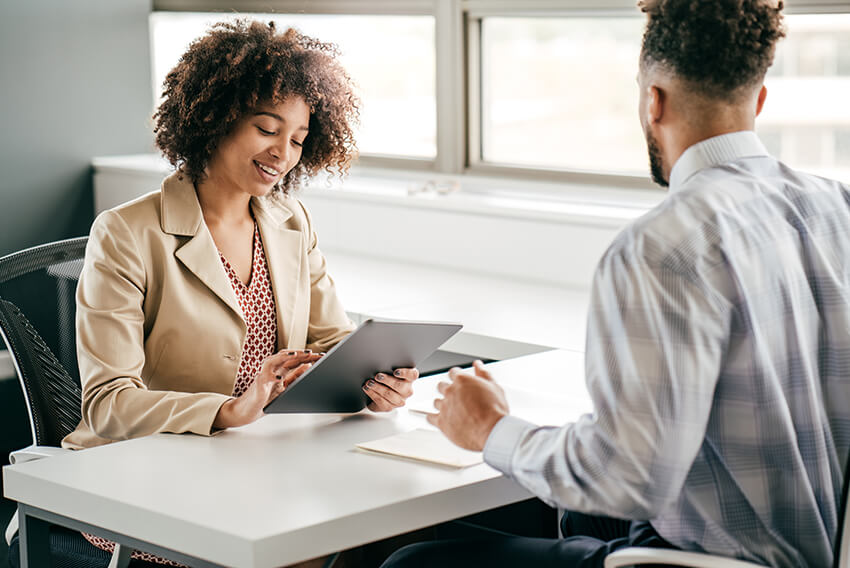 You’re sitting in an unfamiliar room, on the other side of a hiring manager’s desk. You’re a little nervous, but who isn’t at an interview? But you’re not worried. You’re prepared. You’ve got this.

And that’s when it happens — the “gotcha” question. How you handle the next two minutes of the conversation could have a huge impact on your future.

It’s an intimidating scenario that most people face at some point in their lives, and preparation makes all the difference. Luckily, there are people who’ve built a career around getting you ready for that “gotcha” moment. Aerotek Senior Professional Recruiter Matt Wiehe is one such expert. With more than six years of experience recruiting across for a wide variety of positions, he’s seen a lot.

We asked followers on social media for examples of job interview questions they found the most tricky to answer in a job interview setting, and then we played a round of “gotcha” with Matt Wiehe.

In General, What Should People Keep in Mind About the “Gotcha” Question?

Matt: When I’m preparing a candidate, I stress that a large portion of the preparation should include studying their own resume. I want them to think about very specific details around certain times in past roles. For example, details around when they may have had to motivate themselves or others or had to make a difficult decision.

If you’re prepared, and let’s say you’re asked about something at your most recent position that never happened there, but did happen during your time at a previous position, you’ll have that ready in your mind and you can steer the questioning to those specific details. That way you’re not a deer in the headlights, or too vague with an answer.

Matt: The kneejerk answer is to lead with something that’s actually a strength, “I work too hard, I’m a perfectionist,” that kind of thing. That’s not what they’re looking for in my experience. The best way to show what you can do is to be vulnerable, and say what that weakness is, but at the same time have a response for how you’re dealing with that weakness. “I’m reading self-help books, I’m asking my coworkers to challenge me on it and I’m really reflecting to make sure that I’m improving.” That way they see that you’re self-aware but also proactive.

Have You Ever Been Fired?

Matt: You have to be honest, because in today’s world, if you lie it’s going to come back to get you. It’s better to be honest and get into it than to try to sneak one past them. In general, with a candidate, if there’s a red flag, we lead with that in our submittal process to the client. In an interview situation, if there’s a red flag, lead with that and be open and honest, because a lot of the time they might know already. You never want to be negative about a previous position or work relationship. Just state the facts. “My attendance was poor and I was let go.” If there’s any way to then spin it positively, to talk about lessons learned, that’s going to be the lasting impression.

Why Do You Want to Leave Your Current Company?

Of course, nine out of ten times, the reason is money, and along with that a feeling of being undervalued. But you never want to bad-mouth an employer, so you spin it to a positive. “I’m looking for growth and opportunity and that’s why I’m here.”

What Other Jobs Have You Applied For?

Matt: Our clients want somebody who’s got some heat on them. They want people who are in demand. Let them know, “I’ve applied to a few of your top competitors and here is where I am in the process with them .”

Matt: Back to being vulnerable. Share your goals, not only professionally but also personally. If you want a certain position or a certain specialty, talk about it, and if you want to have a family or travel to Europe someday> be sure to share your personal goals as well.

The reason for the interview is more about the culture fit than the X’s and O’s. If everybody at the company wants to grow, and you don’t, that might not be the right fit. You need to be honest, because what’s the point of lying if you’ll just be looking for another job in six months anyway?

Tell Us About a Time You Failed?

Matt: Be very specific, be very vulnerable and just be honest. That’s my advice.

Matt’s a pretty cool customer, not unexpected when somebody’s made a career of preparing people to win a round of “gotcha.”

If you need some advice on job interview tactics, Aerotek experts like Matt Wiehe can work with you to prepare responses based on your specific job history. All you have to do is reach out.